ATLANTA — President Donald Trump on Wednesday put the blame for the ongoing opioid crisis on big pharma and vowed to hold the drugmakers accountable.

“We are holding big Pharma accountable,” the president said while speaking at the Rx Drug Abuse and Heroin Summit in Atlanta.

Refusing donation efforts from major pharmaceutical companies, the president said enough is enough. “I don’t want their money,” Trump said. “They have got to do what is right.”

“My administration is also taking aggressive action to reduce oversupply of highly addictive prescription drugs,” Trump said. “The Department of Justice has prosecuted more than 3,000 defendants in cases involving opioids.”

“We have secured a record $6 billion in new funding to combat the opioid crisis … [and] last year we provided $90 million to prevent youth substance abuse,” the president continued. “Following the recommendation of my surgeon general and many others last year, the distribution of the overdose-reducing drug, Naloxone, increased by over 1 million units. Pretty amazing stuff.”

On Tuesday the Trump administration announced it had charged drug distributor Rochester Drug Co-operative Inc and the company’s executives for their role in fueling the nation’s opioid epidemic. In exchange for entering a deferred prosecution agreement, the company has agreed to pay $20 million and admit it ignored thousands of suspicious orders for opioid pain killers.

The company’s former chief executive has been charged with multiple related felonies — the first case of its kind related to the opioid crisis.

President Trump has made waging war against the opioid epidemic a top priority within his administration. In 2017, he declared opioid abuse a national emergency and in October signed into law a legislative package that lawmakers and public health officials said they hope will help to end the crisis.

According to a report released by the Centers for Disease Control and Prevention, deaths from opioid overdose in the United States jumped 17 percent in 2017 from just one year prior. The report attributed over 49,000 American deaths directly to the use of opioids. 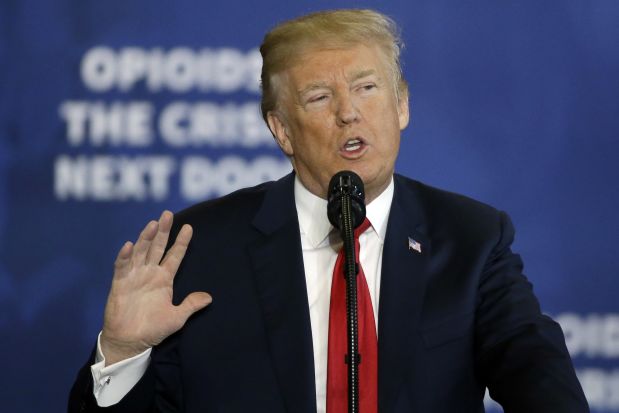