PARKLAND, Fla. (Daily Caller) — Kyle Kashuv, survivor of the Parkland school shooting in Florida, tweeted out a video Tuesday of his confrontation with Deputy Scot Peterson, who was widely accused of hiding outside of the school instead of intervening.

Peterson remains completely silent as Kashuv presses him on his inaction.

“Can you explain to me why you let 17 people die at school?” he asked. “That was your job … it’s disgusting, it’s despicable.”
Peterson, who was 33 years old at the time of the shooting, has gone public with his regret and apologies to the Parkland community. He offered no such remorse when confronted by Kashuv, though his expressionless face appeared to be red throughout the exchange.

Despite being the only armed deputy stationed at Marjory Stoneman Douglas High School on Feb. 8, 2018 — the day gunman Nikolas Cruz went on a deadly rampage — Peterson has claimed he had no legal responsibility to intervene.

He has since stepped down from his post as Broward County Sheriff’s deputy, and a member of the Florida house proposed a bill that would strip Peterson of his $8,771 pension in the Florida Retirement System, according to the Sun Sentinel.

“You had a chance to save those kids,” Kashuv continued. “I don’t know how you live with yourself … 14 of my classmates, never coming back because you didn’t act.” 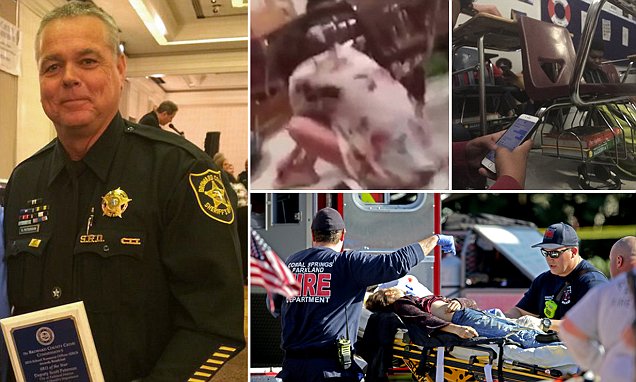