WASHINGTON (AP) — President Donald Trump declared Friday he could keep parts of the government shut down for “months or even years” as he and Democratic leaders failed in a second closed-door meeting to resolve his demand for billions of dollars for a border wall with Mexico. They did agree to a new round of weekend talks between staff members and White House officials.

Trump met in the White House Situation Room with congressional leaders from both parties as the shutdown hit the two-week mark amid an impasse over his wall demands. Democrats emerged from the roughly two-hour meeting, which both sides said was contentious at times, to report little if any progress.

The standoff also prompted economic jitters and anxiety among some in Trump’s own party. But he appeared in the Rose Garden to frame the upcoming weekend talks as progress, while making clear he would not reopen the government.

“We won’t be opening until it’s solved,” Trump said. “I don’t call it a shutdown. I call it doing what you have to do for the benefit and the safety of our country.”

Trump said he could declare a national emergency to build the wall without congressional approval, but would first try a “negotiated process.” Trump previously described the situation at the border as a “national emergency” before he dispatched active-duty troops in what critics described as a pre-election stunt.

Trump also said the hundreds of thousands of federal workers who are furloughed or working without pay would want him to “keep going” and fight for border security. Asked how people would manage without a financial safety net, he declared: “The safety net is going to be having a strong border because we’re going to be safe.”

Democrats, on the other hand, spoke of families unable to pay bills and called on Trump to reopen the government while negotiations continue. Senate Democratic Minority Leader Chuck Schumer said, “It’s very hard to see how progress will be made unless they open up the government.”

Friday’s White House meeting with Trump included eight congressional leaders — the top two Democrats and Republicans of both chambers. People familiar with the session but not authorized to speak publicly described Trump as holding forth at length on a range of subjects but said he made clear he was firm in his demand for $5.6 billion in wall funding and in rejecting the Democrats’ request to reopen the government.

Trump confirmed that he privately told Democrats the shutdown could drag on for months or years, though he said he hoped it wouldn’t last that long. Said Trump: “I hope it doesn’t go on even beyond a few more days.”

House Democrats muscled through legislation Thursday night to fund the government but not Trump’s proposed wall. However, Senate Majority Leader Mitch McConnell has said those measures are non-starters on his side of the Capitol without the president’s support.

A variety of strategies are being floated inside and outside the White House, among them trading wall funding for a deal on immigrants brought to the country as young people and now here illegally, or using a national emergency declaration to build the wall. While Trump made clear during his press conference that talk on DACA (the Deferred Action for Childhood Arrivals program) would have to wait and that he was trying to negotiate with Congress on the wall, the conversations underscored rising Republican anxiety about just how to exit the shutdown.

Seeking to ease concerns, the White House sought to frame the weekend talks as a step forward, as did McConnell, who described plans for a “working group,” though people familiar with the meeting said that phrase never actually came up. Trump designated Vice President Mike Pence, Homeland Security Secretary Kirstjen Nielsen and adviser Jared Kushner to work with a congressional delegation over the weekend. That meeting is set for 11 a.m. Saturday, the White House said.

Some GOP senators up for re-election in 2020 voiced discomfort with the shutdown in recent days, including Cory Gardner of Colorado and Susan Collins of Maine, putting additional pressure on Republicans.

But with staff level talks there is always an open question of whether Trump’s aides are fully empowered to negotiate for the president. Earlier this week, he rejected his own administration’s offer to accept $2.5 billion for the wall. That proposal was made when Pence and other top officials met at the start of the shutdown with Schumer.

During his free-wheeling session with reporters, Trump also wrongly claimed that he’d never called for the wall to be concrete. Trump did so repeatedly during his campaign, describing a wall of pre-cast concrete sections that would be higher than the walls of many of his rally venues. He repeated that promise just days ago.

“An all concrete Wall was NEVER ABANDONED, as has been reported by the media. Some areas will be all concrete but the experts at Border Patrol prefer a Wall that is see through (thereby making it possible to see what is happening on both sides). Makes sense to me!,” he tweeted on Dec. 31.

Trump was joined by Pence in the Rose Garden, as well as House Republican leaders Kevin McCarthy and Steve Scalise. McConnell, who went back to the Capitol, unaware of the press conference, said it was encouraging that the White House officials and the congressional contingent would meet over the weekend “to see if they can reach an agreement and then punt it back to us for final sign off.”

Schumer said that if McConnell and Senate Republicans stay on the sidelines, “Trump can keep the government shut down for a long time.”

“The president needs an intervention,” Schumer said. “And Senate Republicans are just the right ones to intervene.”Graphic shows federal funding gaps of at least two days since 1976.
Adding to national unease about the shutdown are economic jitters as analysts warn of the risks of closures that are disrupting government operations across multiple departments and agencies at a time of other uncertainties in the stock market and foreign trade.

In their first votes of the new Congress, House Democrats approved bills Thursday night to re-open government at previously agreed upon levels. Several Republicans crossed over to join them.

White House and Department of Homeland Security officials have spent recent days trying to make both a public and private case that the situation at the border has reached a crisis point. Polls show a majority of Americans oppose the border wall, although Republicans strongly support it. 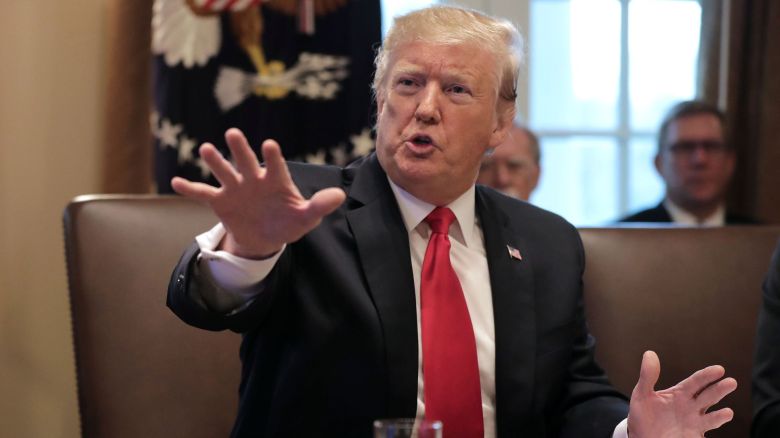