WASHINGTON — The Trump administration on Wednesday pushed back against criticism its received over President Trump’s decision to revoke CNN journalist Jim Acosta’s “hard pass” to cover White House press briefings, saying it has “broad discretion” to regulate who attends such press events.

In a legal filing ahead of a Wednesday hearing on CNN’s request for a temporary restraining order to restore Acosta’s access, the attorneys for the Trump administration argued it “was lawful” to revoke Acosta’s pass in light of his behavior during a heated exchange between he and President Trump during a press conference last week.

But twelve news organizations, including Fox News and The Associated Press, joined forces to file an amicus brief in the case Wednesday, claiming the Trump administration revocation of Acosta’s press pass represented a danger to the First Amendment.

“Whether the news of the day concerns national security, the economy, or the environment, reporters covering the White House must remain free to ask questions. It is imperative that independent journalists have access to the President and his activities, and that journalists are not barred for arbitrary reasons,” a representative from the law firm Ballard Spahr said in a statement on behalf of the news outlets.

In a startling break from its typical support of Trump, Fox News President Jay Wallace said that Secret Service passes for working White House journalists “should never be weaponized.”

“Fox News supports CNN in its legal effort to regain its White House reporter’s press credential. We intend to file an amicus brief with the U.S. District Court. Secret Service passes for working White House journalists should never be weaponized. While we don’t condone the growing antagonistic tone by both the president and the press at recent media avails, we do support a free press, access and open exchanges for the American people,” Wallace said in a statement.

“This is just more grandstanding from CNN, and we will vigorously defend against this lawsuit,” Sanders said. “CNN, who has nearly 50 additional hard pass holders, and Mr. Acosta is no more or less special than any other media outlet or reporter with respect to the First Amendment. After Mr. Acosta asked the President two questions — each of which the President answered — he physically refused to surrender a White House microphone to an intern, so that other reporters might ask their questions. This was not the first time this reporter has inappropriately refused to yield to other reporters.”

“We continue to urge the administration to reverse course and fully reinstate CNN’s correspondent,” WHCA President Olivier Knox said. “The President of the United States should not be in the business of arbitrarily picking the men and women who cover him.” 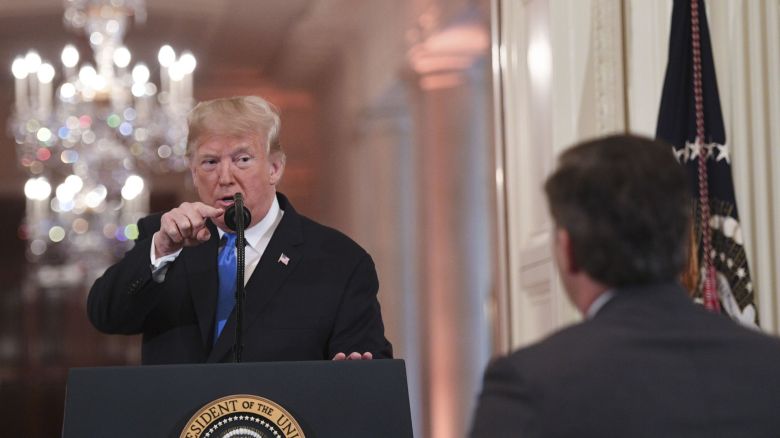