WASHINGTON, D.C. (Fox News) — New Jersey Democratic Sen. Cory Booker is facing accusations of hypocrisy over his calls to delay the confirmation vote of Supreme Court nominee Brett Kavanaugh amid sexual misconduct allegations, as he once admitted groping a friend without her consent in high school.

The senator, who urged the Senate Judiciary Committee to first let the FBI conduct an investigation after California professor Christine Blasey Ford accused the high court nominee of sexual assault over 35 years ago, once wrote an article detailing an instance where he groped a female friend.

“New Year’s Eve 1984 I will never forget. I was 15. As the ball dropped, I leaned over to hug a friend and she met me instead with an overwhelming kiss. As we fumbled upon the bed, I remember debating my next ‘move’ as if it were a chess game,” Booker wrote in the student-run Stanford Daily newspaper in 1992.

“With the ‘Top Gun’ slogan ringing in my head, I slowly reached for her breast. After having my hand pushed away once, I reached my ‘mark,’” he continued, without explaining what he meant by “mark.”

“Our groping ended soon and while no ‘relationship’ ensued, a friendship did. You see, the next week in school she told me that she was drunk that night and didn’t really know what she was doing,” he added.

Booker’s intent of the column was to detail his transformation from a 15-year-old who was “trotting around the bases and stealing second” to someone who was called a “man-hater” over his pro-women views.

“In retrospect, my soliloquy titled ‘The Oppressive Nature of Male Dominated Society and Its Violent Manifestations Rape, Anorexia, Battered Wives’ may have been a surreptitious attempt to convince her that I was a sensitive man, but more likely I was trying to convince myself that my attitudes had changed,” he wrote.

The now-senator came back to the topic a few months later in 1992, penning another article that mentioned the controversial column, which he said was about “date rape,” and admitted that his actions were at odds with his beliefs.

“But by my second column, as I raised my noble pen to address the issue of date rape, I realized that the person holding it wasn’t so noble after all,” he wrote. “With this issue as with so many others, a dash of sincere introspection has revealed to me a dangerous gap — a gap between my beliefs and my actions.”

The columns by Booker, a potential 2020 presidential contender, have resurfaced after he became one of the leading voices of the Democratic opposition against Kavanaugh’s confirmation.

Following allegations of sexual misconduct against Kavanaugh, which he vehemently denied, Booker said the accusations are “serious, credible, and deeply troubling.” After the committee vote was delayed and Senate Judiciary Committee Chairman Chuck Grassley invited both Ford and Kavanaugh to testify on Monday, Booker called for an FBI investigation before holding a hearing.

Paul Mulshine, a columnist for the Star-Ledger, the largest newspaper in New Jersey, wrote Thursday that Booker’s columns will put him in an awkward position amid the scandal rocking the confirmation hearings.

“Based on that Stanford Daily column, Booker should be giving Kavanaugh the benefit of the doubt as well. The point of it was that the future senator had ‘a wake-up call’ and decided ‘I will never be the same.’”

“This disingenuous right-wing attack, which has circulated online and in partisan outlets for the past five years, rings hollow to anyone who reads the entirety of Senator Booker’s Stanford Daily column,” a spokesperson for the senator said in a statement to Fox News.

“The column is in fact a direct criticism of a culture that encourages young men to take advantage of women — written at a time when so candidly discussing these issues was rare — and speaks to the impact Senator Booker’s experience working to help rape and sexual assault survivors as a college peer counselor had on him.”

Lukas Mikelionis of Fox News contributed to the contents of this report. 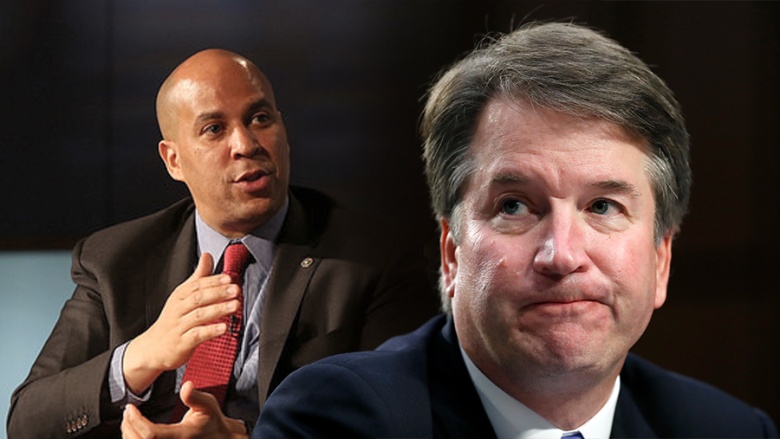