WASHINGTON, D.C. — Judicial Watch announced Tuesday that it has filed suit against the Justice Department to turn over all emails found on the laptop of convicted New York Congressman Anthony Weiner.

The conservative watchdog group says it wants access to all records relating to the FBI’s investigation into then-Secretary of State Hillary Clinton’s private email server. They’re also demanding all communication records between FBI officials regarding Clinton’s knowledge of “illicit activities” involving Weiner, who was married at the time of his arrest to Huma Abedin, vice chair of Clinton’s 2016 presidential campaign.

“The Anthony Weiner laptop-Clinton email cover-up by the Obama DOJ and FBI is central to uncovering the corrupt politicization of those agencies,” Judicial Watch President Tom Fitton said in a statement Tuesday. “The same FBI that provided cover for Hillary Clinton was going full bore against then-candidate Trump and this lawsuit aims to uncover the full truth about that corruption.”

In a related case, Judicial Watch uncovered 424 pages of FBI records that include an email revealing that fired FBI official Peter Strzok created the initial draft of the October 2016 letter then-FBI director James Comey sent to Congress notifying lawmakers of the discovery of Hillary Clinton emails on Weiner’s laptop.

The notification, according to the DOJ IG, came a full month after the emails were discovered by the FBI on Weiner’s laptop. The delay, Judicial Watch suggests, may have been the result of anti-Trump bias by FBI official Peter Strzok and others.

At the time of his arrest, it was rumored that Weiner’s laptop contained “secret file” titled “insurance” which supposedly related to Clinton. The contents of the supposed file, although the topic of much speculation, have never been authenticated or revealed.

Weiner was convicted in a sexting scandal in 2017 after sending sexually explicit photos to a 15-year-old girl. He was sentenced to 21 months in prison. 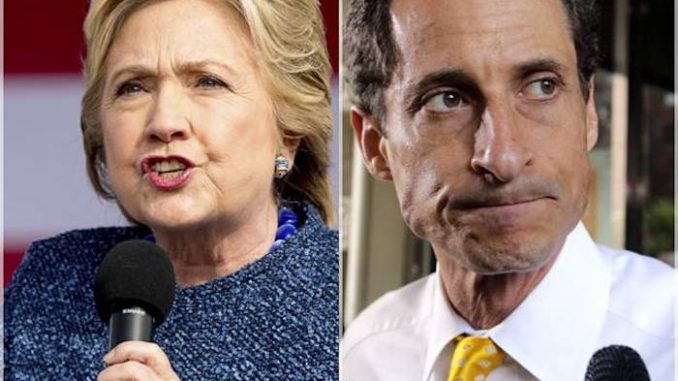