WASHINGTON, D.C. — The first day of confirmation hearings for Brett Kavanaugh erupted into chaos Tuesday as protesters seated in the audience shouted down lawmakers as they attempted to vet President Trump’s pick for Supreme Court nominee.

The shouts led Republican Sen. John Cornyn of Texas to remark, “This is the first confirmation hearing subject to mob rule.”

The protesters, dressed in costumes from the Hulu series “The Handmaid’s Tale”, were removed from the hearing but issued a statement about Kavanaugh, whom they declared a “sexist” shortly thereafter.

“Brett Kavanaugh is an extremist ideologue who, if confirmed to the Supreme Court, will take away women’s basic rights,” the groups’ statement read. The group then went on to slam Kavanaugh for his “anti-abortion, anti-health care and anti-women” views.

“Right now in American, far too many women of color cannot access safe, affordable health care and the ability to decide whether, when and how to raise thriving families is out of reach,” the statement continued. “Brett Kavanaugh will take this already harsh reality and make it worse.”

But the removal of the protestors did nothing to quell the fury of Democrats, who attempted to upstage Republican leaders through a series of quickfire interruptions and objections.

A visibly frustrated Sen. Orrin Hatch, (R-Utah), called out the mayhem plaguing the hearing, stating, the committee shouldn’t have to “put up with this kind of nonsense.”

Illinois Democratic Sen. Dick Durbin, however, defended the interruptions, calling it all part of the “democratic process”.

“What we’ve heard is the noise of democracy,” Durbin said. “This is what happens in a free country when people can stand up and speak and not be jailed, imprisoned, tortured or killed because of it.”

Prior to the hearing, Democrats declared they were going into the meeting “under protest” in light of the Trump administration’s refusal to turn over documents from Kavanaugh’s time working at the White House under President George W. Bush.

“Democrats strongly object to moving forward when so much of his record remains secret. We are shocked at the efforts being taken to jam this nominee through and hide his record from the American public. We go to these hearings under protest,” ranking member Sen. Dianne Feinstein (D- Ca.) said at a news conference Tuesday morning.

But Republicans pushed back, with Senate Judiciary Committee Chairman Charles Grassley (R-IA, arguing that Kavanaugh’s record as staff secretary is irrelevant to his current nomination and that making certain documents available may risk disclosing classified information.

Republicans also scoffed at Democrat suggestions to postpone Kavanaugh’s confirmation hearings until after the November elections, claiming it was all part of the left’s hope of winning seats.

“This is just another obvious and opportunistic attempt to push the confirmation past the midterm elections,” Grassley said. “Not going to happen.” 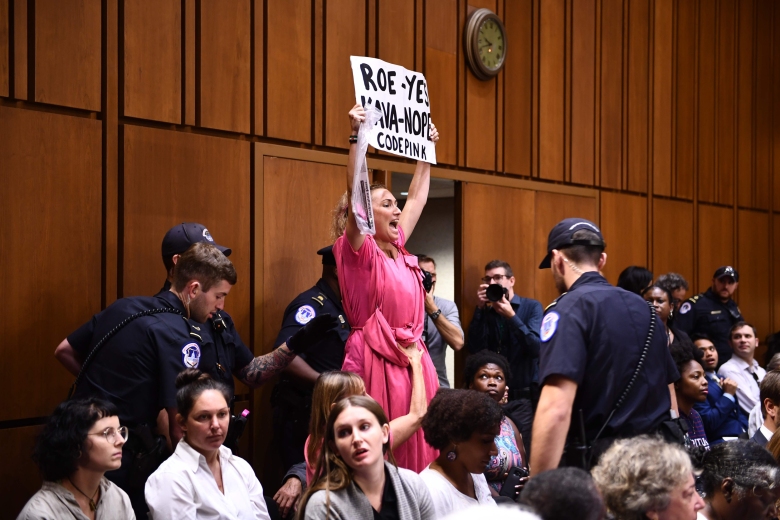