WASHINGTON, D.C. — President Donald Trump on Friday intensified pressure on Attorney General Jeff Sessions to investigate Hillary Clinton, rogue FBI officials and members of the DNC, whom he referred to as “the other side”.

In a series of tweets the president called on Sessions to lay off what he called the “witch hunt” against him and look into “corruption” of the left.

“Jeff, this is GREAT, what everyone wants, so look into all of the corruption on the ‘other side’ including deleted Emails, Comey lies & leaks, Mueller conflicts, McCabe, Strzok, Page, Ohr … FISA abuse, Christopher Steele & his phony and corrupt Dossier, the Clinton Foundation, illegal surveillance of Trump Campaign, Russian collusion by Dems – and so much more,” the president tweeted. “Open up the papers & documents without redaction? Come on Jeff, you can do it, the country is waiting!”

A short while later Trump issued a follow-up tweet where he cited the jail sentence given Thursday to leaker Reality Winner.

“Ex-NSA contractor to spend 63 months in jail over ‘classified’ information. Gee, this is ‘small potatoes’ compared to what Hillary Clinton did! So unfair Jeff, Double Standard,” he wrote.

The president’s comments follow a statement by Sessions issued Thursday where he said he would not be pressured by the president and defended his actions in office.

“I took control of the Department of Justice the day I was sworn in,” Sessions said, “which is why we have had unprecedented success at effectuating the President’s agenda—one that protects the safety and security rights of the American people, reduces violent crime, enforces our immigration laws, promotes economic growth, and advances religious liberty.”

“While I am Attorney General,” he went on, “the actions of the Department of Justice will not be improperly influenced by political considerations.” 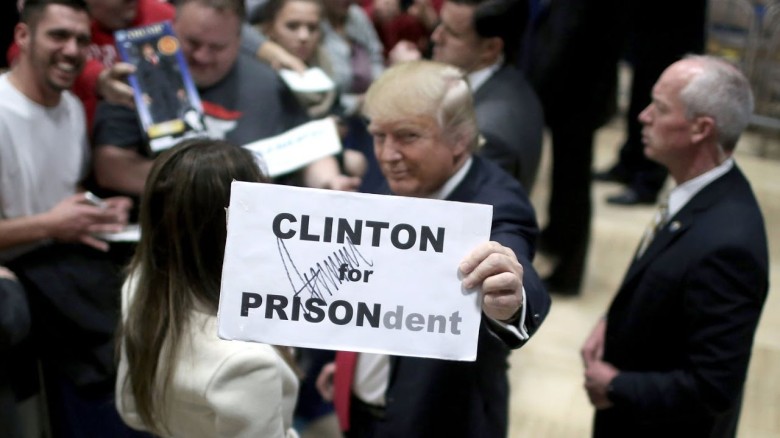