Washington, D.C. (Fox News) — The Trump administration is facing mounting pressure from fellow Republicans and other allies to end the practice of separating children from parents caught illegally crossing the border, as backlash over the enforcement policy quickly escalates into a political crisis.

Some GOP lawmakers want the administration to stop the policy on its own, while Texas Sen. Ted Cruz and others are proposing emergency legislation. Senate Majority Whip Cornyn, R-Texas, said Tuesday he thinks Congress might be able to act on the issue this week. “We need to fix it,” Majority Leader Mitch McConnell added.

House Republicans reportedly are working on their own plan to allow children to be detained for extended periods with their parents, loosening rules that now limit the amount of time minors can be held to 20 days. Meanwhile, GOP governors are pulling their state’s National Guard troops from the border in protest.

All this comes as President Trump and top Cabinet officials put the blame on Congress, in the run-up to a meeting late Tuesday between the president and House Republicans — where discussion of the family-separation backlash will likely dominate.

“Democrats are the problem. They don’t care about crime and want illegal immigrants, no matter how bad they may be, to pour into and infest our Country, like MS-13. They can’t win on their terrible policies, so they view them as potential voters!” he tweeted Tuesday morning.

He also said, “We must always arrest people coming into our Country illegally,” noting most of those detained at the border journeyed without their parents. He again called on Congress to change the laws.

Speaking at a business event Tuesday in Washington, Trump added that child smugglers are exploiting loopholes and, “All we need is good legislation and we can have it taken care of.”

While legislation is being discussed, the family separations stem from the Justice Department’s “zero tolerance” policy, which calls for all illegal border crossers to be prosecuted. Because a 1997 legal agreement and related policies say children cannot be jailed with adults for extended periods, the administration is separating the families.

But the administration is facing bipartisan calls to change its approach.

Cruz’s bill would double the number of immigration judges to 750 and mandate that illegal immigrant families be kept together, unless there has been “aggravated criminal conduct” or the threat of harm to the children, according to Cruz’s office.

The new legislation would also authorize new temporary shelters for immigrant families, and provide for expedited resolution of asylum claims within 14 days.

“All Americans are rightly horrified by the images we are seeing on the news, children in tears pulled away from their mothers and fathers,” Cruz said. “This must stop. Now.”

The controversy has extended across Capitol Hill. During a hearing Tuesday meant to examine the Justice Department inspector general’s report on the Hillary Clinton email probe, Rep. Elijah Cummings, D-Md., used his opening statement to call on Republicans to stand up to the president and say no to “child internment camps.”

“The time is now for the White House to end the cruel, tragic separations of families,” Sen. Lisa Murkowski, R-Alaska, said.

Figures ranging from religious conservative leaders to the head of the U.S. Chamber of Commerce have condemned the policy.

At the state level, Massachusetts Gov. Charlie Baker and Maryland Gov. Larry Hogan, both Republicans, announced that they would reverse decisions to send National Guard troops to the border, citing the separation of families.

“Until this policy of separating children from their families has been rescinded, Maryland will not deploy any National Guard resources to the border. Earlier this morning, I ordered our 4 crewmembers & helicopter to immediately return from where they were stationed in New Mexico,” Hogan tweeted Tuesday.

Trump and members of his administration have said that it is Congress that needs to act, as they are just enforcing the laws on the books.

“Now is the best opportunity ever for Congress to change the ridiculous and obsolete laws on immigration,” Trump said on Twitter Tuesday.

“Fundamentally, we are enforcing the law,” Attorney General Jeff Sessions said on “The Ingraham Angle” on Monday night. “Hopefully people will get the message … and not break across the border unlawfully.”

Secretary of Homeland Security Kirstjen Nielsen, in the face of tough questioning from the White House press corps, defended the policy at a heated press briefing on Monday.
Specifically, Nielsen called for Congress to overturn the Flores Settlement Agreement and expansions of it which do not allow families to be housed together, and accused critics of wanting only open borders, which she said would benefit child smugglers.

“Those who criticize the enforcement of our laws have offered only one countermeasure: open borders, the quick release of all illegal alien families and the decision not to enforce our laws,” she said. “This policy would be disastrous.”
She said there has been a 314 percent increase in adults and children arriving at the border fraudulently in the last five months. Nielsen also blasted Congress for demanding the administration not enforce the laws that Congress itself has passed.

“Surely it is the beginning of the unraveling of democracy when the body who makes the laws, instead of changing them, tells the enforcement body not to enforce the law.”
Yet other Republicans are now putting pressure on the administration to change course.

“I appreciate the need to enforce and protect our international boundaries, but this zero-tolerance policy is cruel,” former first lady Laura Bush said in an op-ed for The Washington Post. “It is immoral. And it breaks my heart.”

“The administration’s current family separation policy is an affront to the decency of the American people, and contrary to principles and values upon which our nation was founded,” Arizona senator and longtime Trump foe John McCain said in a statement. “The administration has the power to rescind this policy. It should do so now.”

While some of those voices are establishment GOP voices who have often grimaced at Trump’s hardline immigration policies and rhetoric, even some on the right flank of the party are demanding immediate action.

A number of immigration bills are under consideration in Congress, addressing the family separations to various degrees. A bill supported by Republican leaders, which would end the diversity lottery visa and fund Trump’s border wall, would also end the separations by housing children with adults.

Rep. Mark Meadows, R-N.C., the head of the conservative House Freedom Caucus, said on “Fox & Friends” that a more conservative bill being introduced Tuesday afternoon would also address the issue while keeping a narrower focus and keeping out more controversial topics.

“What it does it deals with this issue we’re having at the border with separation of children from their parents,” he said. “It also deals with some of the asylum issues at the border, but it also takes out some of the more controversial issues like sanctuary cities, the wall, [Deferred Action for Childhood Arrivals], and it keeps it very narrow,” he said.

Fox News’ Gregg Re and The Associated Press contributed to this report. 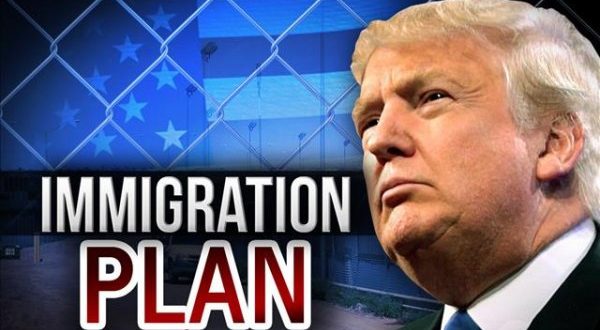