“The Fake News Media has been so unfair, and vicious, to my wife and our great First Lady, Melania,” Trump tweeted.

“During her recovery from surgery they reported everything from near death, to facelift, to left the W.H. (and me) for N.Y. or Virginia, to abuse. All Fake, she is doing really well!”

Trump claimed in another tweet that “four reporters spotted Melania in the White House last week walking merrily along to a meeting” but “they never reported the sighting because it would hurt the sick narrative that she was living in a different part of the world, was really ill, or whatever.”

CNBC reporter Eamon Javers had tweeted on May 30 that he had seen the first lady “walking with her aides in the West Wing” the day prior.

“Not that this will deter the conspiracy theorists, but I saw the First Lady walking with her aides in the West Wing yesterday afternoon,” Javers wrote.

Melania Trump attended a ceremony for Gold Star families on Monday that was closed to the press. It was slated to be her first public appearance since she underwent surgery at Walter Reed Medical Center in Bethesda, Md., on May 14.

The first lady is slated to appear at a Federal Emergency Management Agency event Wednesday afternoon with the president.

Speculation surrounding the Trump’s whereabouts in the weeks after her surgery has been the subject of several tweets and discussions on cable news.

One Rolling Stone writer speculated that she was “concealing abuse,” and The Atlantic’s David Frum posed a hypothetical about President Trump having “punched the First Lady in the White House.”

“I wish that I didn’t suspect that the prolonged, poorly explained public absence of Melania Trump could be about concealing abuse. I wish that it was a ludicrous prospect. I wish that the @POTUS wasn’t a man with a history of abusing women, including those to whom he is married,” Stone reporter Jamil Smith wrote on Twitter.

“Suppose President Trump punched the First Lady in the White House (federal property = federal jurisdiction), then ordered the Secret Service to conceal the assault. POTUS has Article II authority over Secret Service. Is that obstruction? Under Sekulow/Dowd, apparently NO,” David Frum, senior editor of The Atlantic tweeted in response.

CNN also discussed Melania Trump’s whereabouts on its weekly media affairs program “Reliable Sources,” which included a graphic with a calendar of the number of days the first lady was absent.

If any First Lady “disappeared,” you’d “want to know where she is,” tweeted Brian Stelter, host of CNN’s “Reliable Sources”.

Calls to the White House for comment were not immediately returned. 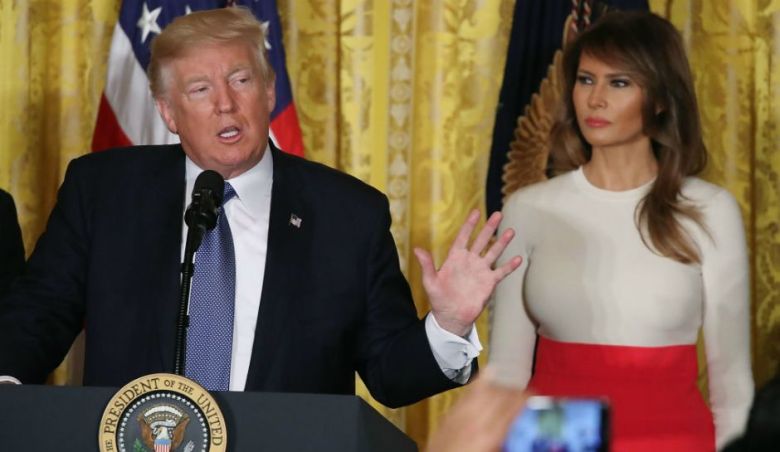