“Will be giving a Full Pardon to Dinesh D’Souza today. He was treated very unfairly by our government!” the president proclaimed via Twitter.

D’Souza, who was convicted in 2014 to making illegal campaign contributions, has long maintained his innocence, claiming he was “forced” into copping a plea.

“Bharara (the prosecutor who charged D’Souza in 2014) & his goons bludgeoned me into the plea by threatening to add a second redundant charge carrying a prison term of FIVE YEARS,” D’Souza tweeted Thursday in response to the president’s announcement.

In addition to pardoning D’Souza, President Trump says he is weighing his options in regard to the convictions of business mogul Martha Stewart and former Illinois Gov. Rod Blagojevich.

Stewart, who founded a multi-million dollar lifestyle and home merchandising empire, was convicted in 2004 on charges related to insider stock trading. Prosecutors at the time alleged that she sold stock based on a nonpublic tip she received and avoided a loss on shares she owned of ImClone Systems. Stewart was found guilty of multiple felony counts, including conspiracy and making false statements to federal investigators, and was sentenced to five months in federal prison. She was released in 2005.

Blagojevich, a Democrat, was impeached and removed from office in 2009 on corruption charges following allegations that he solicited bribes in an effort to “sell” Barack Obama’s open Senate seat. He was sentenced to a 14-year federal prison sentence, which he is currently serving in Englewood, Colorado.

“There’s another one that I’m thinking about, Rod Blagojevich,” Trump told reporters Thursday while onboard Air Force One, adding that Blagojevich had received a lengthy sentence “for being stupid and saying things that every other politician, you know, that many other politicians say.”

“There was a lot of bravado … plenty of other politicians have said a lot worse. And it doesn’t, he shouldn’t have been put in jail. And he’s a Democrat. He’s not my party. But I thought that he was treated unfairly.” 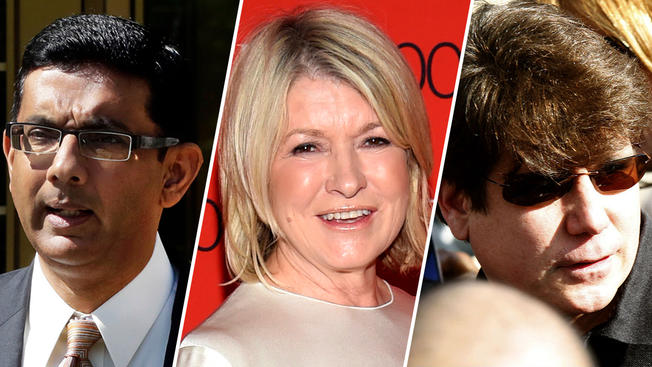