“This whole country is going nuts, and the NRA is our way/They’re responsible for this whole production/They hold the strings, they control the puppet/And they threaten to take donor bucks/So they know the government won’t do nothing and no one’s budging/Gun owners clutching their loaded weapons/They love their guns more than our children,” the singer wrapped after being introduced on stage by Alex Moscou, a survivor of the fatal school shooting in Parkland, Fla. that occured on February 14.

“Gun owners clutching their loaded weapons/ they love their guns more than our children,” the singer continued rapping from his song “Nowhere Fast,” which bashes the Second Amendment and gun owners.

Prior to introducing Eminem to the awaiting crowd, Moscou said he and other survivors were “tired of hearing politicians sending their thoughts and prayers to us, and doing nothing to make the necessary changes to prevent this tragedy from happening again.”

This isn’t the first time that Mathers’ on-stage performances have turned political.
He raised eyebrows last year after unleashing a hate-fueled rhyme against Republicans and president Donald Trump in which he challenged the Commander-in-Chief to respond.

“Trump, when it comes to giving a shit you’re as stingy as I am/ Except when it comes to having the balls to go against me, you hide ’em,” he wrapped. “‘Cause you don’t got the fucking nuts like an empty asylum/ Racism’s the only thing he’s fantastic for.”

Although Eminem’s gun bashing lyrics were was received by fans in attendance, the singer’s critics were quick to point out his own gun-related transgressions, including being charged with possession of a concealed weapon and assault in the year 2000.

Eminem also received probation and was ordered to perform community service for committing another gun-related crime back in 2001.

Calls for statement from the NRA were met with, “We think Mr. Mathers’ reputation speaks for itself.” 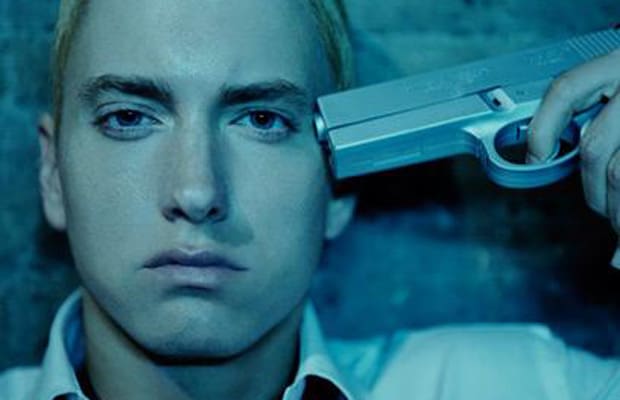