ABU DHABI, United Arab Emirates — Former president George W. Bush on Thursday blasted the Trump administration and said of illegal immigrants that we should not only welcome them but thank them for their efforts.

“Americans don’t want to pick cotton at 105 degrees, but there are people who want to put food on their family’s tables and are willing to do that,” Bush said according to a report published by the Associated Press (https://tinyurl.com/y8wvwnfa). “We ought to say thank you and welcome them.”

“America’s their home,” Bush continued, criticizing current president Donald Trump’s approach toward DACA recipients, adding that we should be grateful that they are willing to do the “jobs that Americans won’t do.”

Speaking at a summit in Abu Dhabi, the embattled 43rd president also said there is “pretty clear evidence that the Russians meddled” in 2016 U.S. presidential election.

“Whether [Russia] affected the outcome is another question,” Bush said, taking another jab at Trump. “It’s problematic that a foreign nation is involved in our election system. Our democracy is only as good as people trust the results.”

“He can’t think, ‘How can we both win?’” Bush said of Russian president Vladimir Putin. “He only thinks, ‘How do I win, you lose?’”

“He’s got a chip on his shoulder,” he added of the Russian leader. “The reason he does is because … the demise of the Soviet Union troubles him. Therefore, much of his moves [are] to regain Soviet hegemony. … That’s why NATO is very important.”

Bush went on to say Thursday that America’s immigration system is “broken” and that he had “tried, but unsuccessfully” to correct the problem during his 8 years as president.

This isn’t the first time that the former president has attacked Trump in such a public way. In 2017 Bush came under fire for comments in which he suggested Trump had promoted bigotry and falsehoods to the detriment of the country.

“We have seen our discourse degraded by casual cruelty,” Bush said while speaking at a seminar in New York (https://tinyurl.com/y728fx2d). “We’ve seen nationalism distorted into nativism. Forgotten the dynamism that immigration has always brought to America.”

Supporters of President Trump called Bush out at the time over previous statements he made during the Barack Obama administration that he did not feel it “appropriate” for former presidents to criticize the work of a sitting one. When asked during Obama’s tenure in office whether or not he agreed with some of the administration’s then policies, Bush said it wasn’t his place to comment.

Calls to the White House for statement on Bush’s comments were not immediately returned. 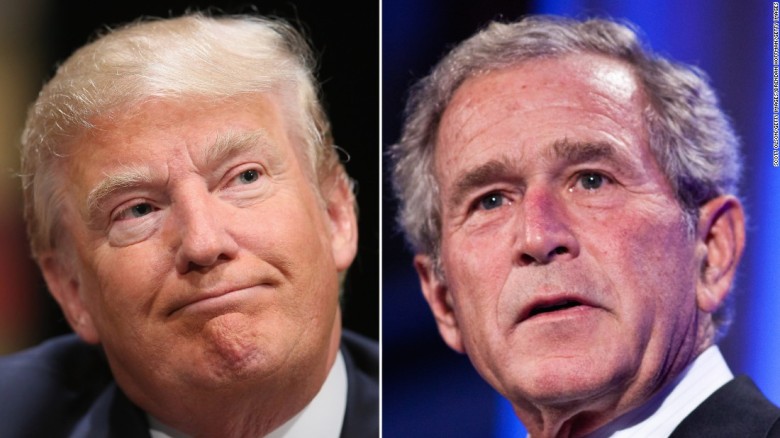