PHOENIX, AZ — Joe Arpaio, the controversial former Sheriff of Maricopa County, Arizona who stood firm in his no-nonsense approach to law enforcement, announced Tuesday that he would seek to fill the Arizona Senate seat currently occupied by Republican Jeff Flake.

“I am running for the U.S. Senate from the Great State of Arizona, for one unwavering reason: to support the agenda and policies of President Donald Trump in his mission to Make America Great Again,” Arpaio, who was recently pardoned by President Donald Trump for denying a judge’s order to stop traffic patrols that targeted illegal immigrants, announced on his official Twitter page (https://twitter.com/RealSheriffJoe).

The 85-year-old Arpaio’s tough approach to crime has earned him both praise from his supporters and criticism from those who claim his stern treatment of prisoners is motivated by race.

In an interview with The Washington Examiner (http://www.washingtonexaminer.com/joe-arpaio-running-for-senate-in-arizona/article/2645354), Arpaio denied the allegations and said he is prepared to take on his critics.

“I have a lot to offer. I’m a big supporter of President Trump,” Arpaio said. “I’m going to have to work hard; you don’t take anything for granted. But I would not being doing this if I thought that I could not win. I’m not here to get my name in the paper, I get that everyday, anyway.”

“My mother and father came here from Italy, legally of course. I have a soft spot for the Mexican community having lived there,” Arpaio continued. “I’m not going to get into my personal life, but I will say we have four grandkids and some have a different ethnic and racial background. I don’t say that. I don’t use my grandkids. So, I have a soft spot, but still, I’m going to do my job. You have to do it.”

“Being a U.S. senator is a little different than being the sheriff, because you can do a lot of things in the U.S. Senate, and I have many plans, believe me. It’s tough. It’s a tough decision. But, if you’re going to come across that border, you should be arrested and get the consequences of it,” he added.

Arpaio said he expects the road ahead of him to be a tough one, but said he is in it to win. In addition to winning over the Hispanic vote, the 24-year law enforcement veteran will need to gain the support of women. Former state Sen. Kelli Ward, an outspoken conservative, has announced that she, too, is vying for Flake’s seat. 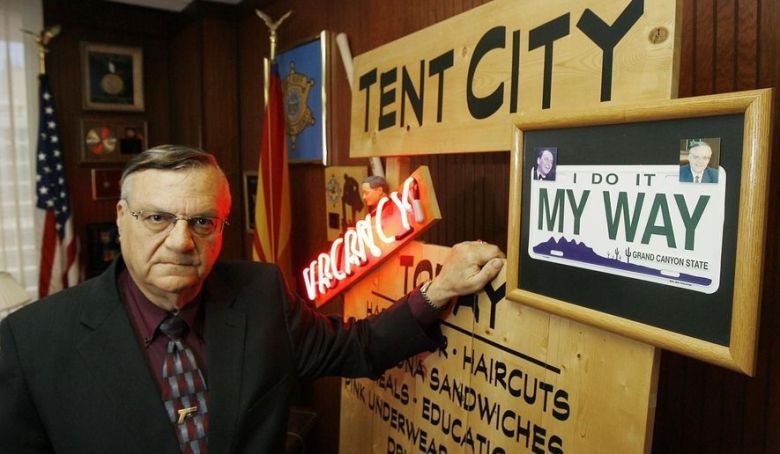