WASHINGTON, D.C. — One of D.C.’s biggest bromances turned into a bitter war of words on Wednesday after President Donald Trump unleashed on once biggest supporter Steve Bannon.

Responding to excerpts of a forthcoming book, “Fire and Fury: Inside the Trump White House,” in which Bannon called Donald Trump Jr. “treasonous” and “unpatriotic” for meeting with Russian operatives during the campaign, Trump Sr issued a blistering statement against his former ally, claiming that Bannon had “lost his mind”.

“Steve Bannon has nothing to do with me or my Presidency,” Trump wrote. “When he was fired, he not only lost his job, he lost his mind. Steve was a staffer who worked for me after I had already won the nomination by defeating seventeen candidates, often described as the most talented field ever assembled in the Republican party.”

“Now that he is on his own, Steve is learning that winning isn’t as easy as I make it look,” Trump’s blistering statement continued. “Steve had very little to do with our historic victory, which was delivered by the forgotten men and women of this country. Yet Steve had everything to do with the loss of a Senate seat in Alabama held for more than thirty years by Republicans. Steve doesn’t represent my base—he’s only in it for himself.”

The president also went on to accuse Bannon of being the source of various leaks during his time at the White House, where he served as a key advisor to the Trump administration.

“Steve pretends to be at war with the media, which he calls the opposition party, yet he spent his time at the White House leaking false information to the media to make himself seem far more important than he was,” he said. “It is the only thing he does well.”

“Steve was rarely in a one-on-one meeting with me and only pretends to have had influence to fool a few people with no access and no clue, whom he helped write phony books,” Trump added.

The statements from each side come as a shock to most political watchers, particularly since the pair had seemingly parted on good terms.

After Bannon’s departure from the White House in August of 2017, Trump thanked Bannon and praised him for his work during the presidential campaign and resulting administration.

“I want to thank Steve Bannon for his service,” the president tweeted at that time. “He came to the campaign during my run against Crooked Hillary Clinton – it was great! Thanks S.”

For his part, Bannon, who denied claims at the time that he had been fired, pledged to continue doing all that he could to help ensure president’s ongoing success.

“If there’s any confusion out there, let me clear it up: I’m leaving the White House and going to war for Trump against his opponents — on Capitol Hill, in the media, and in corporate America,” Bannon said at the time.

Calls to Steve Bannon for statement on Trump’s remarks were met with, “no comment”. 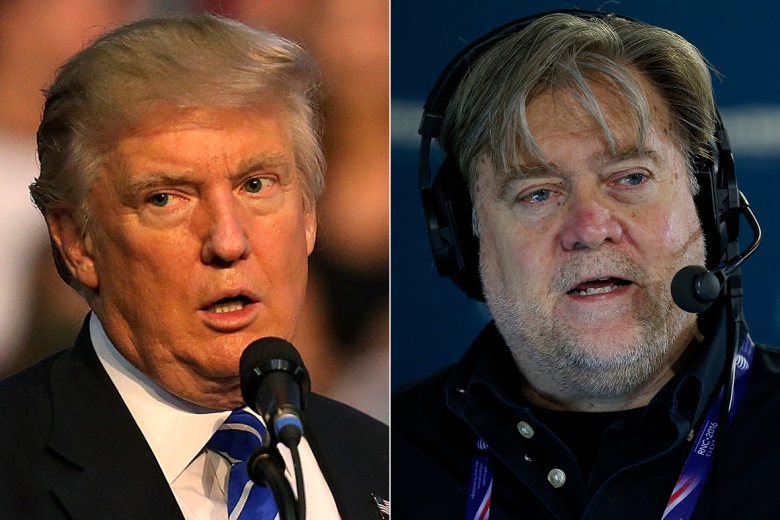