WASHINGTON, D.C.– First lady Melania Trump came out swinging on Monday over comments by President Trump’s ex-wife Ivana in which she refers to herself as the true “first lady”.

In an interview with “Good Morning America” (https://www.youtube.com/watch?v=3SuegUiqqDg) to promote her new book “Raising Trump,” Ivana Trump said she has direct access to the president whenever she wants it and speaks to her ex husband roughly “every 14 days”.

“I have the direct number to White House, but I [don’t] really want to call him there because Melania is there,” she said. “I don’t want to cause any kind of jealousy or something like that because I’m basically first Trump wife.”

Smiling into the camera, she added: “I’m first lady, okay?”

But would Ivana Trump trade places with Melania if she could? No, she claims. In fact, she says she feels “sorry” for the current Mrs. Trump.

“I think for her to be in Washington must be terrible,” Ivana Trump said of Melania. “It’s better her than me. I would hate Washington.”

The comments did not sit well with the current Mrs. Donald Trump who was quick to issue a scathing statement in response to her husband’s ex. In a release issued through her communications director Stephanie Grisham (http://www.foxnews.com/politics/2017/10/09/melania-trump-slams-ivana-for-calling-herself-first-lady.html), Melania Trump said the president’s former missus is simply a disgruntled ex who is desperate for attention and that she was simply using her former status to sell books.

“This is unfortunately only attention-seeking and self-serving noise,” the statement reads.

“Mrs. Trump has made the White House a home for Barron and the President. She loves living in Washington, D.C. and is honored by her role as First Lady of the United States,” the statement continued. “She plans to use her title and role to help children, not sell books.”

Ivana Trump was married to Donald Trump from 1977 to 1992. She is the mother of the president’s oldest 3 children, Eric, Ivanka and Donald Trump, Jr. 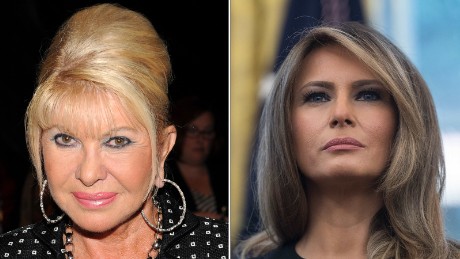