The rush for fan gear comes one day after the former Army Ranger defied his coach’s order to sit out the national anthem, choosing instead to come out of the locker room and stand in support of the flag and, according to the NFL’s official online merchandise site, Villanueva jerseys are far outselling those of his fellow NFL players (http://www.nflshop.com/Jerseys/pg/1/ps/84/so/top_sellers).

Villanueva’s defiance followed calls by President Trump for NFL players to show support for the flag.

In a barrage of Sunday morning tweets, Trump criticized players who bent a knee in protest instead of standing for the national anthem and called out the NFL for their ever dropping ratings, claiming patriotic Americans were “fed up” with player tactics.

The tweets came just one day after the President told a crowd of supporters at a rally in Alabama that NFL team owners should fire any “son of a bitch” who “disrespects our flag.”

However, despite almost instantaneous social media praise for Villanueva from NFL fans on Sunday, Steelers head coach Mike Tomlin made it clear he was less than pleased with his player’s decision to ingore a direct order.

“Many of them felt like something needed to be done. I asked those guys to discuss it and whatever they discussed that we have 100 percent participation or we do nothing,” Tomlin said in a post game news conference. “They discussed it for an appropriate length of time and they couldn’t come to an understanding, so they chose to remove themselves from it. They were not going to be disrespectful in the anthem so they chose not to participate, but at the same time many of them were not going to accept the words of the president.”

When asked about Villanueva ignoring the order and coming out for the anthem, Tomlin replied: “Like I said, I was looking for 100 percent participation, we were gonna be respectful of our football team.”

Many of Villanueva’s fellow teammates also took a swipe at his decision to stand for the pledge.

“Some guys wanted to take a knee, guys wanted to stand,” quarterback Ben Roethlisberger said after the game. “We said whatever we do, we need to make sure we’re unified as one group because that’s what we’re about, and that’s what this should be about is staying together as one unit and one group and one brotherhood, things like that.

“So rather than have some guys kneel and some guys stand, the conclusion was made kind of by everybody that the best thing to do was just to stay in the locker room or in the tunnel, if you will.”

Steelers linebacker James Harrison echoed Roethlisberger’s comments, telling Penn Live (http://www.pennlive.com/steelers/index.ssf/2017/09/steelers_national_anthem_vote.html), “We thought we were all in attention with the same agreement, obviously. But, I guess we weren’t.”

However, not all of Villanueva’s teammates disapproved.

One fellow teammate, Cam Heyward, said he stands by the bronze star veteran’s decision. “We support our guy Al,” Heyward told ESPN (http://www.espn.com/nfl/story/_/id/20810701/pittsburgh-steelers-surprised-alejandro-villanueva-move). “He feels he had to do it. This guy served our country, and we thank him for it.” 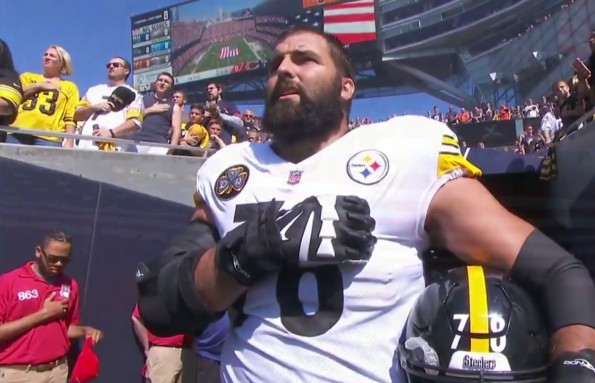