WASHINGTON, D.C. — North Korea said on Monday that it’s ready to give the United States a “severe lesson” in the wake of stricter sanctions imposed upon the rogue state by the United Nations.

The statement came after the U.N. Security Council voted unanimously to approve tough new U.S.-drafted sanctions last Saturday, which included a ban on coal and other exports worth over $1 billion.

Speaking at the ASEAN Regional Forum on Monday, North Korean Foreign Minister Ri Yong Ho blamed the Trump administration for the UN crackdown and said it’s ready to give the United States a “severe lesson” if met with military force to surrender it’s nuclear weapons.

“We will, under no circumstances, put the nukes and ballistic rockets on the negotiating table,” North Korean Foreign Minister Ri Yong Ho told the ASEAN Regional Forum on Monday.

Yong Ho’s comments coincided with a statement released by North Korea’s state-run KCNA news agency in which North Korean officials accused the United States of “trying to drive the situation of the Korean peninsula to the brink of nuclear war, running amuck to conduct missile drill against the DPRK and deploying massive strategic equipment to the peninsula.”

“(North Korea) will make the US pay dearly for all the heinous crimes it commits against the state and people of this country,” KCNA said.

In response, US Secretary of State Rex Tillerson said the new UN measures were necessary to send a message to North Korean leader Kim Jong Un that the international community is united in its efforts to disarm North Korea of it’s nuclear weapons.

“We hope again that this ultimately will result in North Korea coming to a conclusion to choose a different pathway, and when the conditions are right that we can sit and have a dialogue around the future of North Korea so that they feel secure and prosper economically,” Tillerson said.

When asked about a time frame while speaking at the annual Association of Southeast Asian Nations (ASEAN) meeting in Manila, Tillerson said America’s patience is wearing thin but that the Trump administration is doing everything it can to avoid bloodshed by first taking the strategic route.

“We’re not going to give someone a specific number of days or weeks,” Tillerson said. “This is not a ‘give me 30 days and we are ready to talk.’ It’s not quite that simple. So it is all about how we see their attitude toward approaching a dialogue with us.”

“The best signal that North Korea could give us that they’re prepared to talk would be to stop these missile launches,” Tillerson added.

However, according to a White House statement, during a phone call between President Trump and South Korean president Moon Jae-in on Sunday, the leaders “affirmed that North Korea poses a grave and growing direct threat to the United States, South Korea and Japan, as well as to most countries around the world.”

Chinese state media on Monday said it agreed that North Korea must be punished for its missile tests, but criticized the U.S. for its “arrogance”. China, the second largest foreign creditor of the United States behind Japan, is North Korea’s most important ally. 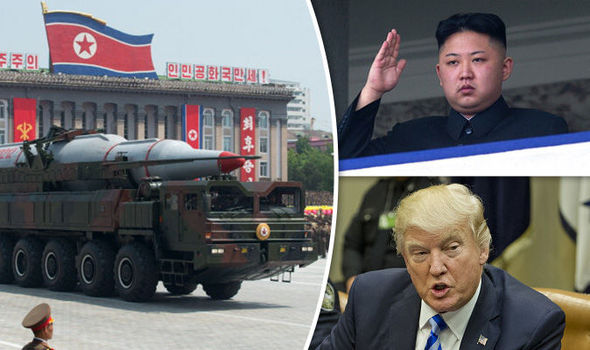