FAIR OAKS, CA — Twin brothers who each dedicated their lives to serving their nation have found themselves penniless and living in a car after the pair say they lost their home due to a loan gone bad.

Clifford and Gary Koekoek, 84-year-old twins who each fought in the Vietnam War, lost the home that had been in their family for decades last October after taking out a loan to do some repairs to the property.

“We took a loan thinking that we had a conventional loan,” Gary Koekoek told Fox 40 Sacramento (http://fox40.com/2017/07/18/homeless-84-year-old-twin-brothers-search-for-permanent-housing/) . However, the pair soon discovered the loan had an adjustable APR and the payments quickly became too much to bear. In October the bank foreclosed and the brothers found themselves living in their car.

“It’s a lot of stress,” Clifford said, choking back tears. “I’d rather go back to the war and get shot at than this.”

Aaron Hoerner, a friend of the family for more than a decade, says he was shocked to discover the brothers’ predicament and has since set up a Go Fund Me account (https://www.gofundme.com/help-gary-and-clifford-kukor) in the hopes of getting the war heroes back into a permanent home.

“They were just living in their car in front of Raley’s when I found out,” Hoerner said of the brothers’ sad predicament. “It’s easy to walk by and not look at their situation but if you stop and talk to somebody, everybody has a story.”

Born in the Netherlands, Clifford and Gary Koekoek were raised in Belgium until World War II. The horrors they experienced under Nazi control is what drove them to never marry or bring children into the world, they say, and as a result, all they have is each other.

“All my life I’ve seen people killed, tortured, taken away to concentration camps,” says Clifford. ” I don’t want that.”

Despite all the tragedies the pair has witnessed in their lives, their current situation is seemingly the hardest to accept. Still, the pair say they are struggling to keep their heads up in the hopes that tomorrow will be a brighter day.

“I guarantee you within the next months I will win the big lottery,” Gary added laughing through tears. “I will win millions of dollars.” 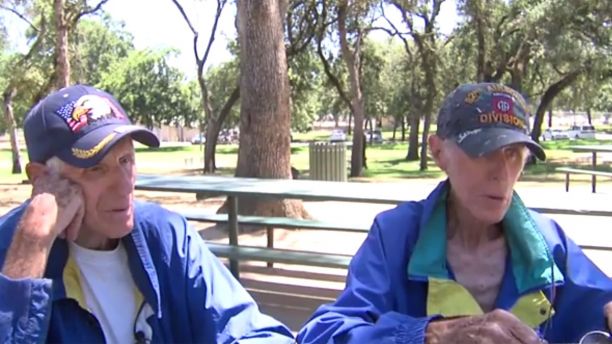