WASHINGTON, D.C. — In a series of controversial remarks, Donald Trump made his frustrations clear on London mayor Sadiq Khan’s handling of the recent wave of terror attacks as the president took to social media on Sunday to voice his disapproval.

“Pathetic excuse by London Mayor Sadiq Khan who had to think fast on his ‘no reason to be alarmed’ statement. MSM is working hard to sell it!” Trump tweeted
Sunday in response to Kahn’s proclamation that London residents had no no cause for alarm. “At least 7 dead and 48 wounded in terror attack and Mayor of London says there is ‘no reason to be alarmed!’” Trump added.

It was the second time in Trump’s short presidency that he’s criticized London’s first Muslim mayor. Khan’s “no reason to be alarmed” comments were in regard to an uptick in police presence on London streets as the city grapples to overcome it’s latest terror attack.

“Just like terrorists are constantly evolving and finding new ways to disrupt us, harm us, attack us, the police and experts and all of us are finding new ways to keep us safe,” Khan said on Sunday. “Londoners will see an increased police presence today and over the course of the next few days. No reason to be alarmed.”

A spokesperson for Khan responded by calling Trump’s remark “ill-informed” and said the president took the mayor’s words out of context.

(The mayor) “has more important things to do than respond to Donald Trump’s ill-informed tweet that deliberately takes out of context his remarks urging Londoners not to be alarmed when they saw more police — including armed officers — on the streets,” Khan’s spokesperson said in a statement.

President Trump followed up his heated remarks toward Kahn with a Twitter rant on Monday in which the president blasted the 4th and 9th Circuit Court’s rulings to shut down his proposed travel ban.

“In any event we are EXTREME VETTING people coming into the U.S. in order to help keep our country safe. The courts are slow and political!” the president added.

In a measure to move his executive order on the travel ban forward, lawyers for the Trump administration on Thursday appealed to the Supreme Court to review and reinstate the ban, hoping the court will overturn lower court rulings that have stalled the order from being implemented. If overturned, the ban will restrict travel from 6 predominantly Muslim countries that are historically considered hot beds for terror. 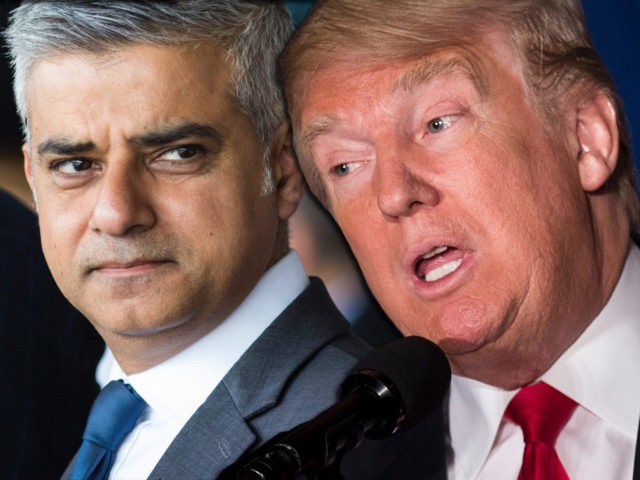