NEW YORK, N.Y. — Stephen Colbert, host of ‘The Late Show with Stephen Colbert’ is under fire on social media after critics say he took a joke against president Donald Trump way too far.

Criticizing Trump on Monday night for unexpectedly ending an interview with CBS News’ “Face the Nation” host John Dickerson on Saturday, Colbert’s opening monologue quickly veered off course into a tirade that many viewers called tasteless and “homophobic”.

“Sir, you attract more skinheads than free Rogaine,” Colbert said during his profranity-laden diatribe, which was repeatedly bleeped during the telecast. “You have more people marching against you than cancer. You talk like a sign language gorilla that got hit in the head. In fact, the only thing your mouth is good for is being Vladimir Putin’s c–k holster.”

Almost instantaneously, network viewers took to Twitter in defense of the president and to demand Colbert’s removal from the air.

“Hey @CBS #StephenColbert is NOT a comic. I NEVER tune in because of his hate-filled attitude towards @POTUS @realDonaldTrump #FireColbert,” tweeted Rep. B.J. Nikkel.

“#firecolbert CBS STAND UP AND DO THE RIGHT THING FIRE COLBERT THIS SHOULD NOT BE TOLERATED,IF IT WAS SAID ABOUT OBAMA HE WOULD BE GONE,” tweeted another viewer using the Twitter handle “MikeM”.

Still another viewer going by the handle, “hank_1972” tweeted, “Time for him to go. Total trash. I will boycott advertisers. #FireColbert”.

Brit Hume, senior political analyst for the Fox News Channel was also quick to chime in on the controversy. “Will there be consequences for Stephen Colbert’s obscene attack on the president last night, or even any comment from CBS?” Hume tweeted.

“They wrote this. This was not a rant that he came up with on the top of this head. They wrote this,” Rove said while appearing on Fox News on Tuesday night. “I’m going to continue to do what I do with anything Colbert. I’m going to refuse to watch the SOB.”

So far, the normally outspoken Colbert is lying low amidst the controversy.

A spokesperson for the CBS network declined to provide statement when reached for comment. 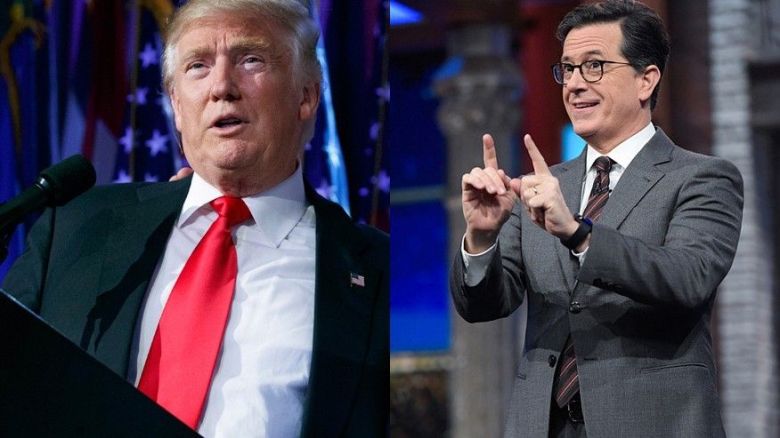