DURHAM, N.C. — A Facebook post by a former Marine and his wife who said the scene inside a Veterans Administration hospital in Durham, North Carolina was so horrific that they felt compelled to take pictures and post them to social media has led to national outrage.

Stephen McMenamin and his wife Hanna posted photos of two veterans who were who were visibly suffering as they waited for care inside a VA hospital waiting room. The McMenamins said both men, who were senior citizens, were ignored for hours despite complaining multiple times of being in severe pain. One of the men almost fell out of his wheelchair, and the other laid the floor after being told he would have to wait for an exam bed.

After the photos went viral, one of the men in the photos, a Vietnam veteran by the name of Jesse Lee, was identified as the man in the wheelchair. He said he went to the VA to seek treatment for severe pains after a leg amputation.

“Somebody in real bad pain should be seen,” Lee said. “It felt like a railroad spike was going through my foot. It’s like one of the worst pains you’ve ever felt in your life.”

The other man has not yet been identified but McMenamin said one VA nurse, in particular, seemed to intentionally ignore the man’s pleas for help.

“That’s somebody’s dad, that’s somebody’s grandfather,” Hanna McMenamin said. “(He) was “very shaky, trembling and he was asking for help. He was getting pretty desperate.”

Eventually the unnamed veteran laid down on the floor in an attempt to relieve the pain but was ordered back up by hospital staff.

DeAnne Seekins, Medical Center Director for the hospital said she plans on investigating the treatment that the two elderly men received.

“It is an honor to serve America’s heroes and actions that do not align with our core values will not be tolerated,” she said in a statement. “We pride ourselves on providing the highest quality care to the Veterans we serve and being responsive to our patient’s needs. Veterans deserve nothing less.”

The McMenamin’s seem doubtful that much will be done considering the response they say they’ve received from VA administrators.

“The VA is very unhappy that we have posted this photo and it has been seen around the country. They have asked us again to remove this photo, claiming on of the participants does not want this posted,” said Hanna McMenanin.

As of late Tuesday, the post has been shared more than 116,000 times (https://www.facebook.com/hanna.dickson/posts/10208647901980267). A spokesperson for the medical center says one of the employees involved has been removed from patient care pending an internal review. 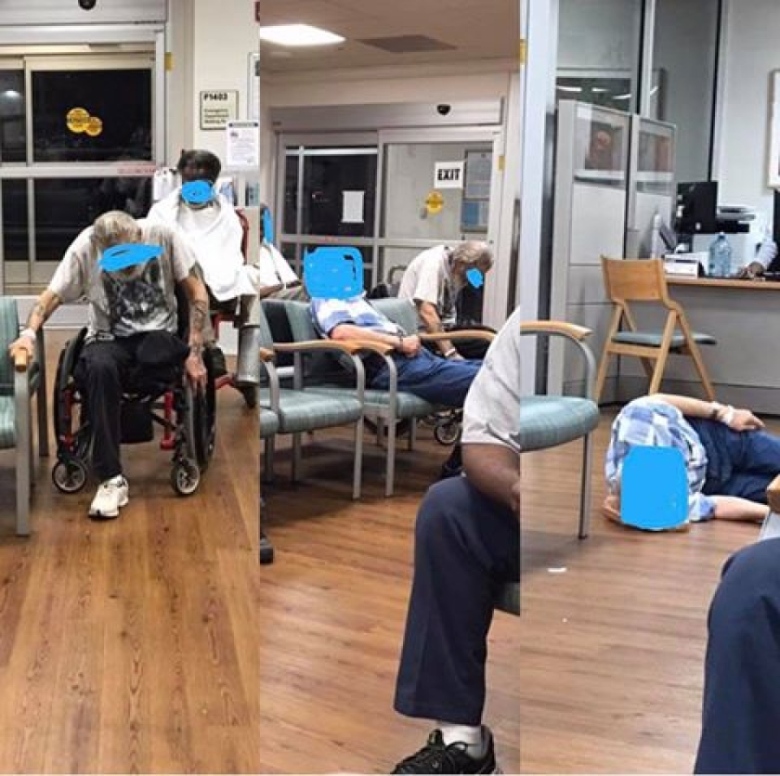