ASHBURN, VA – A black waitress who received thousands of dollars in donations after she claimed she received a racist note and no tip from a customer in January made the whole story up, the customer claims.

Kelly Carter, a waitress at Anita’s New Mexico Cafe in Ashburn, Va., claimed that a white man declined to tip her for service on his $30.52 restaurant bill and that he wrote “Great service, don’t tip black people” at the bottom of his receipt.

Daniel Hebda, a lawyer for the customer in question, said in a statement on Friday that his client did leave Carter a tip, one penny, because her service was lacking, not because she is black.

Carter, however, insists that the story is true. “I looked at the receipt three times is what I did. Because I was shocked. Because I’ve never, never being a server seen that,” she told WRCTV (http://www.nbcwashington.com/news/local/Shocking-Message-On-Waitress_-Receipt_Washington-DC-410044465.html).

The incident became a national news story after Carter posted a photo of the receipt on social media and the Loudon County NAACP quickly stepped in to investigate the matter.

A Virginia man who said he was “appalled” over the alleged incident launched an online fundraising campaign that produced more than $3,600 in donations on Carter’s behalf. 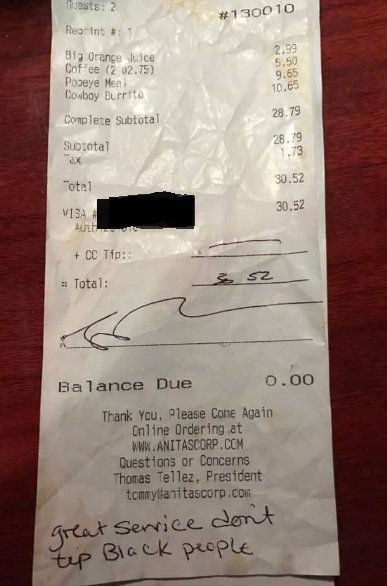